I got the photos back from the decora shoot I did a few months ago! : D


They played after Prima Donna at the Green day gig, although it may be the same band members they play American rock and roll and it's awesome, they were so amazing live! Billie looked like a tiny man in a coat four sizes too big for him XD
Apparently Manchester was the only gig they played at in the UK tour to, so I'm glad I got to witness it. They played in a tiny venue in London a few days later, I can't imagine how fun that must have been!

I'll be posting some photos and videos from the gig soon, I also have a few snaps from Jilly's : D

The gig was purely amazing! I swear to god I was the only person dancing in the stands, although it must have been noticeable because Tré caught one of my kisses I was doing for a joke and blew me one back -megasqueel-
Never have I thought it was this good to stick out like a sore thumb until now : D

I went to Jilly's afterwards and I'm kinda drunk now so I had to re-write this a few times, I have millions of videos from the gig so I'll sift through them tomorrow and post some!

I went shopping yesterday and I MET TRÉ COOL! I can't believe it! And he put me on the guestlist for tonight's show! OMG!

For some reason I've been able to buy things recently. Here's some of it ^_^

My outfit from the meet yesterday: 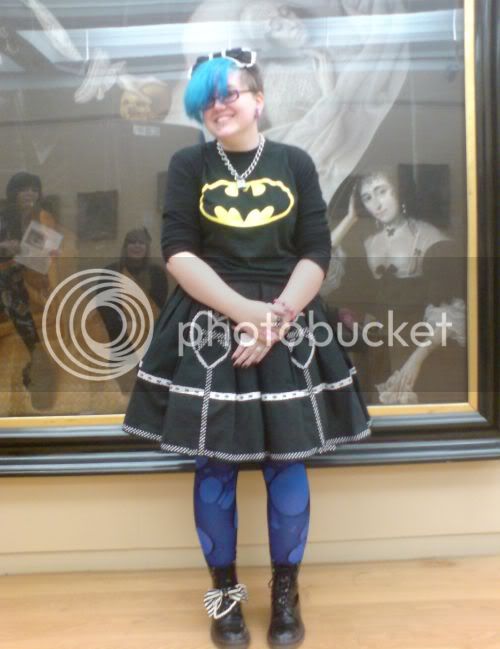 I had a really good time (aside from the fact it was good to get out of the house), what did everyone else do?

I stole Stevie's tablet and I love it. Ima get me one of these <33

Woohoo. Today I went to Tesco, bought a butt load of sweets and various bits, got home and catagorised them and put them into bags o goodies for Friday, because I am just that damn sad XD
Then I proceeded to throw buckets of water at the table in the back garden to drown the spiders living in it's legs, brought it into the house and then decided the layout for the actual tea party table.
Then I made two cakes to test the cooking chocolate I bought, and I dropped my camera on one of them like a goon so I had to lick the chocolate of it before I could take a photo o_0
Then I talked to Stevie and checked my emails, and found out that some of the stuff on my shelf in Afflecks has been sold. YAY!

It's been a good day.

Tomorrow I'm going out with Stevie to meet up with Ben for a smoke, he used to be in our class at college, and I used to be good friends with him. I haven't seen him properly for a lonnnnng time, I'm looking forward to it, it should be good.

On Wednesday I'm going to Afflecks to get my loot for my stuff that was sold, and hopefully Yifang will tell me whether I'm going to be working at her shop permanently or not. I hope so, because not only is the money good, it's really good fun working there and she's an overall really nice person. Oh and I bought some purple and white bunny ears on Friday, they match my purple JSK so nicely : D